Tweets60 is a Twitter client for your S60 handsets. Seems that Ravensoft, the developer of this twitter app will have two versions –  basic and advance. The basic version will be free for everyone.

Right now this is under private beta testing. Probably by next week or so it might go public.

However developer has to do some polishing before making it public. I came across some bugs, like it stores all the avatars in your phone and as a result it appears on your phone gallery. When the Tweets60 app is intalled on your phone memory, the database grow resulting in memory full. But now I have installed it on my memory card and din’t come across that problem. However that is not a solution.

I kind of like the user interface (UI) but lacks in features like posting images etc, we cannot accept it to be perfect right now, since it is still in testing stages. I am sure it will include more features as it graduates.

Here are some screen shots which I took. 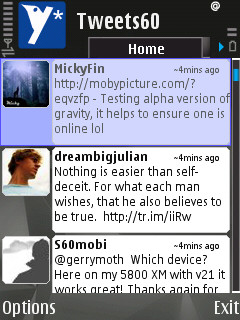 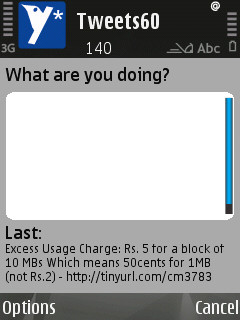