We’ve been rolling out new versions of Google Maps for mobile at a fast pace lately, and the first Google Maps for BlackBerry update of 2010 is a big one. For version 4.0, we’ve added new features to help you find places faster, post from those places with Google Buzz, star them for quick access, and more.

Search by voice
For starters, we’ve added Search by voice to all BlackBerry devices to save your overworked thumbs. Simply press and hold the green “call” button, speak your search, and see your results quickly appear without typing a single letter. Try it now for any search, like the name of my favorite hometown pizza place, “Punch Pizza in Minneapolis.” You can also search by voice for addresses like “802 Washington Avenue Southeast” or search for other another pizza place to try by speaking, “pizza restaurants.” Currently supported languages include multiple English accents and Mandarin Chinese. 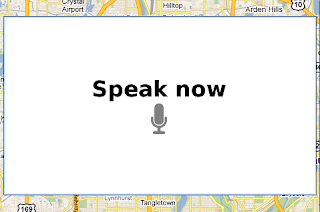 Google Buzz
Google Buzz for mobile also makes its debut on BlackBerry phones in Google Maps 4.0 (see availability). Use the Google Buzz layer to see what’s going on around you or to post to the layer yourself. Check out the many ways to explore the Buzz layer in Google Maps for mobile, including sharing pictures, news, and more. From the Maps main menu, select Layers > Buzz to enable the layer; open the menu and select “Post Buzz” to add your own public post from a location or place. 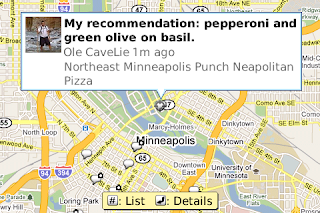 Take your searches and starred places to go.
Just like in Google Maps on Android, the BlackBerry version now provides personalized search suggestions from your maps.google.com search history. If I previously searched for “Punch Pizza” at home, I can simply type “pun” into Maps on my phone to see “Punch Pizza” at the top of the suggested search terms. Make sure you’ve signed in to your Google Account (Menu > Sign In) and have Web History enabled for your account.

Signing in to your Google Account also synchronizes starred items between maps.google.com on your computer (My Maps > Starred items) and phone (Menu > Starred Items). I’ll do my heavy pizza research at home, star several pizzerias I want to try, and browse the list in Google Maps on my phone when I’m ready to eat.

To get started, install the latest version of Google Maps 4.0 for BlackBerry by going to m.google.com/maps in your BlackBerry’s Internet Browser. The update for BlackBerry Enterprise Server administrators and users, including support for BlackBerry OS 5.0 phones, is available here.